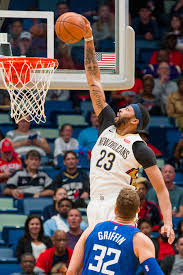 The New Orleans Pelicans are locked in an intense, fierce contest to make the playoffs.  For the first time in a long time, the New Orleans NBA franchise is in playoff contention.  And in the hyper competitive Western Conference, every game left in the regular season now has playoff intensity.  Eight teams are within four games of each other and are battling each other for only 6 playoff spots.  With only about 10 games left to play any of these 8 teams could either be the 3rd seed or eliminated from the playoffs.  For even the most passive basketball fan, these are exciting times.

Of the playoff the contenders, the Pelicans have the 7th hardest remaining schedule in the western conference. Currently the team is in the 6th position.  Although  strong teams stand between the Pels and the playoffs, Anthony Davis and company are themselves a strong opponent.  Luckily, most of the teams with stronger strengths of schedule are also in the playoff hunt.  Two teams currently ahead of the Pelicans -Oklahoma City and San Antonio – play each other and each plays the Pelicans.  And OKC has the toughest remaining schedule in the Western conference while San Antonio has the 5th strongest.  Also in contention, the Utah Jazz, who are currently only 1 game behind the Pels have the 4th toughest schedule.  The Western Conference is the toughest in the NBA but by winning the Pels control their own destiny and make the playoffs.

Winning starts with Anthony Davis. Seriously mentioned as a MVP candidate, the unibrow has put up gargantuan numbers this year and has also elevated the play of the supporting cast.  In previous years, Davis played great for 3 and ¾ of the game.  But when the game was on the line, Davis might have well have been on the bench cause he disappeared.  But now Davis demands the ball in the game’s waning seconds and uses his indomitable talent and leads the team to exciting wins against great competition.  Jrue Holiday provides backcourt scoring and the timeless Rajon Rondo provides leadership and game management.  Together with other role players, these Pels can compete with nearly every team in the league and expect to win every game.

But the competition is intense and any of the 8 remaining teams could either host a playoff series or be home watching the games like everybody else.  Coach Alvin Gentry has had the most success as a coach with a running, fast paced offense and a trapping tough man to man defense.  Since DeMarcus Cousins’ injury, the team’s personnel has favored this strategy, and Gentry finally seems confident.  With Davis and company playing at a high level and good coaching the team can win some tough games.  In fact, if the Pels win 5 of their next 8 and get a little help from the other playoff teams, a playoff spot is all but assured.  But if they lose four games, they might be watching on TV wondering what went wrong.