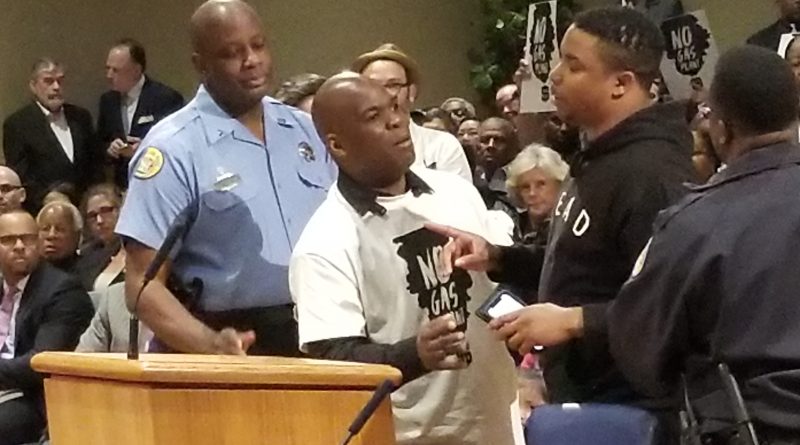 “Let’s try this again, without the actors!” Thus says the judge. The City Council says, “OK” as it sits on a cool $5 million – the fine payment from Entergy (quite the come-up). Soon there will be do-over vote (a mulligan, a formality, a performance?). “To be or not to be,” that will once again be the question. But unlike Hamlet, the Council won’t be contemplating suicide, just a power plant.

Entergy, like SW&B, apparently has a pumping problem. But their problem isn’t pumping water out of the city. It’s pumping electricity into it. The dilemma (according to Entergy): if Entergy is not allowed to build a new power plant then it can’t guarantee that parts of the city won’t have to deal with occasional power outages. These outages may affect certain areas around the times when they mostly need power, like during or after a hurricane, or when it rains hard, or when too many neighbors are broiling steaks, running the hairdryer, or blasting the AC at the same time. The new plant will eliminate such concerns (apparently) while producing a mild amount pollution and toxicity. But fear not, if all goes wrong, the plant will be stationed way out in Michoud where mostly Vietnamese and black people live.

By now you know the story. Entergy paid people to flood a Council hearing and support its proposal. These supporters overcrowded the council’s chambers and prevented power plant protesters from voicing their oppositon directly to the council. The Council subsequently approved the proposal, only to discover it’d been astroturfed. Even so, the council stood by their approval based on the proposal’s merits, but fined Entergy $5 million for acting bad. Last week, Judge Piper Griffin essentially said, “UMM.. Let’s do it again”

So,  there will be another vote. A new City Council will now consider the merits of Entergy’s proposal while hearing the concerns of all those who are against it. This time they’ll do so without the paid actors. That will not change a thing. Expect nothing new! In the immortal words of Smokey (see the movie Friday), write it down, take a picture, The Council will re-approve the power plant without a hitch. The question is what will become of the $5 million?

When the Council first announced that it would be fining Entergy $5 million for astroturfing their hearings it was said the money would go to the SW&B. You know the SW&B, the agency that has all kinds of problems pumping water out of the city, but never seems to have a problem coming up with reasons why it needs to suck in more money.  And Mayor LaToya Cantrell insisted the SW&B should get all of the fine money to pay for upgrading its ancient pumps and narcoleptic employees. Come on guys – how will we ever see the pot-holes in the streets if they’re flooded? Meanwhile, the Council has reconsidered. But with new fair share money set to flow into the city for the S&WB, should the money be spent elsewhere?

Speaking of things biblical, in the beginning men burned bulls and other animals to curry favor from their god. It was written that their god deemed it a pleasing odor. Apparently, their neighbors did not, because the practice came to a halt (have you ever smelled a live or dead animal being burned? Anyway…). Today we burn coal, oil, and natural gas not just because it’s still the most practical form of energy we know, but because those who profit from it deem the smell of new money a pleasing odor; however, their neighboring environmentalists do not. But like it or not, the fact still remains that Entergy has an energy monopoly in NOLA, and the prospects of putting up windmills or a giant solar plant in Michoud just aren’t practical.

Turns out that our only real option is to hope that Entergy keeps its’ word, that it’ll deliver us more energy with less pollution. Or there’s the other option: when the power goes out, you can walk up the street, knock on your neighbors’ doors and kindly ask them to have their wives turn off the hairdryers and turn up their AC’s. That will likely result in another “To be or not to be” dilemma, one involving whether a foot should be placed up a certain part of your body or whether extra police should be hired to patrol your part of town.

4 thoughts on “Not So Fast, Entergy. Not So Fast”