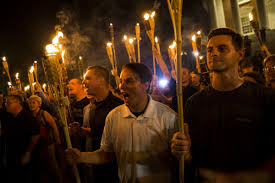 There’s something demoralizing about having to make the case that you matter.

Yet somehow, it’s all I’ve been doing since Friday night when the events in Charlottesville began.

It leaves little time to process my own hurt and fear as a black person in a profoundly racist moment. Instead, I must go on the offensive. How can I convince the skeptics and equivocators, my friends and neighbors, that yes, the concerns of Americans with darker skin or Jewish surnames are as important as their own? But someone has to do it, or this will happen again.

The necessary tactics are obvious and tiresome. By now I can rattle off the most common almost without thinking.

There is the patient arguing of facts that should be indisputable: No, the Klan members and neo-Nazis marching with torches and shields are not equivalent to the clergy, ordinary citizens, activists and even “anti-fascists” who protested against them. No, there weren’t “many sides” that were equally violent. In fact, violence — the belief that people of color are inferior and should be removed to create a white ethnic state — is the animating philosophy of the white supremacists marching in front of Confederate Gen. Robert E. Lee’s statue. Opposing that violence is in no way comparable to the violence itself, and it is disgraceful of the president to say so.

There are the appeals to reason, grown tedious for having been so often repeated: No, taking down a monument is not an “erasure of history.” No, it is not a slippery slope from removing mutinously erected statues of Lee to dynamiting monuments to George Washington. No, even if all the Confederate monuments disappeared overnight, we would not as a country forget that the Civil War ever happened or what it meant. After all, we still have books and museums and cemeteries and preserved battlefields and structural inequality.

Then there are the analogies, the individual stories, all the more painful for being constantly retold: No — I can’t just “get over it,” because I can’t just take off my dark skin, which permanently marks me as the other. No, they aren’t “just statues”: They bring up personal, painful memories of current racism and marginalization — shall I recount those for you, again? Yes, the fact that Charlottesville’s marchers were willing to mow down protesters and kill an innocent person feels existentially threatening to me, a black woman, the sort of person who is their real target.

I’ll do it, of course. I’ll have the argument, invite the debate, slowly spell it out in a measured tone. Because through a thousand arguments on Facebook and Twitter, through opinion pieces and face-to-face conversations, someone’s mind might be changed.

Even so, the more I explain, the more depressing it becomes. Because there is little so disheartening as having to argue for why your friends, neighbors and countrymen should care about your life. To ask politely why you aren’t valued and propose that they reconsider.

Because that’s really what it comes down to, isn’t it? Does our nation care about its blacks, its Jews, its people of color? How much are their comfort and their safety worth? Are they worth more than the satisfaction that comes with being able to make a dig at “identity politics” and your left-leaning movement of choice? More than a flag or statue that you have some pleasant association with, if any at all? More than your unwarranted commitment to defending an obviously incompetent president? More than the minuscule possibility that hiding out in a pack of Nazis might have been one “very fine” person who shouldn’t be tarred with the same brush?

Each time I allow myself to argue with an obdurate, defensive person about what happened in Charlottesville, or about what Confederate statues mean and why they should go, my own question becomes more obvious. Why would so many Americans rather undergo one million mental contortions than admit that someone else’s safety matters? Why is it so hard for you to care?

The answer, I think, is not one that I’ll like. But perhaps you can take up the burden of explaining that to me.