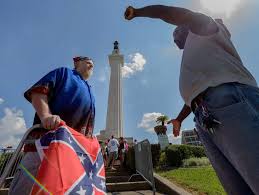 Mayor Mitch Landrieu has shown the kind of bold and strong leadership worthy of national office.  And he is showing other Southern municipalities how to de-litter their landscapes and catapult their cities and towns into the 21st century.  As for the would be obstructionists who appeared in town, the rag tag would be armed insurrectionists loyal to the Confederacy’s traitorous past were tolerated and allowed to exercise their constitutional right to stupidity and divisiveness.  Landrieu’s use of the police and barricades prevented any escalations of the few altercations.

Removing those monuments to racism and white supremacy mean the full acquisition of enfranchisement and American citizenship for every African American New Orleanian.  Under the leadership of Landrieu, New Orleans is showing every Southern city the path to a brighter future.  According to Landrieu, “ The historic record is clear: the Robert E. Lee, Jefferson Davis, and P.G.T. Beauregard statues were not erected just to honor these men, but as part of the movement which became known as The Cult of the Lost Cause. This ‘cult’ had one goal — through monuments and through other means — to rewrite history to hide the truth, which is that the Confederacy was on the wrong side of humanity.”  Landrieu continues, “…these men did not fight for the United States of America, They fought against it. They may have been warriors, but in this cause they were not patriots.  These statues are not just stone and metal. They are not just innocent remembrances of a benign history. These monuments purposefully celebrate a fictional, sanitized Confederacy; ignoring the death, ignoring the enslavement, and the terror that it

In fact, I have never been prouder to be a New Orleanian in my life.  Even as a frequent critic of the Landrieu administration, I gushed with pride and joy when Landrieu proclaimed, “So when people say to me that the monuments in question are history…. it immediately begs the questions: why there are no slave ship monuments, no prominent markers on public land to remember the lynchings or the slave blocks; nothing to remember this long chapter of our lives; the pain, the sacrifice, the shame … all of it happening on the soil of New Orleans.”

Not lost on me was the strong imagery of the NOPD maintaining control. The beauty of African American NOPD police officers arresting and taking to jail those Confederate loyalists was a beautiful sight to see.  New Orleans is placing these dim witted simpletons next to their beloved monuments to hate.  The police were measured yet determined and showed remarkable restraint in the face of heavily armed men dressed in bullet proof vests and other paramilitary gear.  One wonders if the Baton Rouge police had shown the same de-escalation tactics would Alton Sterling still be alive for having only a small pistol in his pocket.  And are African American men treated with equal courtesy while walking the streets on NOLA exercising their right to bear arms?

Nonetheless, New Orleans under the leadership of Mayor Mitch Landrieu is leading the country and showing the South that removing these monuments to hatred and slavery cleanses the stains of a racist past that only the deliberately obtuse can deny.  Landrieu’s monumental accomplishment is the model for the rest of the country to follow.  There are currently over 750 Confederate monuments around the country.  Resistance will be strong, but the will to move our great country closer toward the goals and aspirations of the Constitution remain a real possibility.

Here’s more irony.  We will now  SELL THOSE STATUES (Thanks OT) to the highest bidder!  Hooray Mayor Landrieu!!