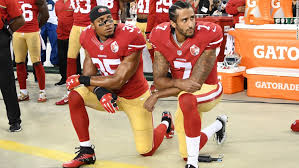 Fans booed as players kneeled to protest racial inequality and police brutality.  President Trump insists the protests are disrespecting the military and our country’s heritage.  Last year, Colin Kaepernick started sitting down during the national anthem to protest the police being allowed to kill unarmed black men with impunity.  Now teams are locking arms, and kneeling before the national anthem. In fact only a few players are continuing to protest during the national anthem.  Yet the boo birds are loud and clear.  They don’t want their entertainers reminding them of life issues.  Booing those who are peacefully using their platform is more about class envy and expectations of highly paid athletes of color.

And while it’s important to point out that mostly white fans have expectations of docility and gratefulness from black athletes towards them, another important issue must be parsed.  The idea that black athletes cannot identify or lobby for the rights of black people is an integral part of the exchange of adoration and money for whites.   In fact, black athletes are ascribed supernatural gifts.  Beast, a freak, a horse or an animal are frequent descriptions of black athletes.  Even when their play is particularly clever, they are credited with high football IQ.  Whites fans restrictions on black athletes behavior are a part of the bargain.

For years only the biggest names would dare challenge this notion that in exchange for riches and adoration, black athletes had to be silent on social issues.  Ali, Jim Brown, Bill Russel, and lately Kaepernick were just some of the brave souls who dared speak openly about the ills of society.   But now we have league wide team protests.  But these protests are not about police brutality or racial inequality.  These protests are a response to President Trump.  And these new  protests are being whitewashed in the process. 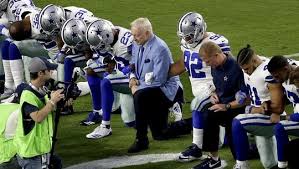 The issue of police brutality and racial inequality is not why teams are locking arms and kneeling prior to the national anthem.  Teams are advocating for free speech and the right to protest.  Only a few believers in these notions are actually fighting for racial equality and against police brutality and kneeling during the anthem. One of the great frustrations of African American life is the reframing by whites of an African American perspective into something it is not at all about. Since evidently Blacks are not intelligent enough to completely express themselves, whites, who would rather never address an African American criticism, rephrase the complaint into a punishable offense.  The boos from white fans are a distraction form the issues of racial inequality and police brutality in the black community.  The boos from the white fans invoke Trump huge doses of white privilege.  White fans loudly remind the protesting players that their kneeling is actually about attacking the military and disrespecting our country.  The black perspective is forbidden in sports.

Another of the great frustrations of African American life is the constant lessening of the African American perspective.  A local newspaper now asserts that African Americans should be happy to be fortunate enough to live in America. After all, according to this article, “the bottom 10 percent in America have it better than the top 10 percent in Russia, Portugal and Mexico.”   And athletes make millions of dollars.  Forget high levels of poverty in black communities.  Forget uneven access to capital and resources.  Just stop all this complaining and be content with your lot in life. It could be worse.  You get the idea that life would be so much simpler if these blacks would just stop all the bitching and moaning and just accept that the black condition in America will not get any better here though it’s better than three other countries in the world.

Generally, whites view the black progress as white oppression.  Blacks being allowed into colleges means fewer whites are allowed into college.  And as if there are a limited number expressions of free speech available for blacks to utter, whites change a protest about police brutality into an attack on the military.  Despite the fact that African Americans serve in the military   at a higher rate than whites, painting blacks as unpatriotic fits neatly into a limiting narrative within which whites prefer to see blacks.  Prone to criminality. Check.  Untrustworthy. Double check.  Unpatriotic.  A chorus of boos.  The benefits to maintain a system that provides first and direct access to profits motivates even the least likely and poorest white to work to protect the status quo in America.

The steadfast holdouts who continue to protest during the anthem may help shine light on the issues of racial inequality. The boos will grow louder. Players protest at risk to their careers.  But so did Muhammad Ali.

One thought on “Why Fans Are Booing Pre Anthem Protests”