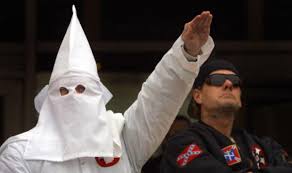 The lives of African Americans have improved dramatically in the last 25 years.  From Barack Obama to Lester Holt, African Americans have ascended to the highest offices and highest profile jobs and continue to overcome the obstacles of society. Largely, those who have embraced education have been able to improve their lives and the lives of their families.  Ironically these increases in accomplishment have resulted in increasing harsh treatment for a huge percentage of other African Americans.  Furthermore, the country has recently seen an increase in the rise of racist domestic terrorist groups like the Nazis and KKK.  Additionally those who dare stand for equal rights and justice have been met with intensified consequences and repercussions.

This can be explained by a concept known as moral licensing.  Moral licensing is the human response to doing good things.  “Past good deeds can liberate individuals to engage in behaviors that are immoral, unethical, or otherwise problematic, behaviors that they would otherwise avoid,” according to a study at Stanford University.  So after Barack Obama, America is overtly more overtly racist and anti-black.  And the response to a high profile African American expressing her constitutional right to freedom of speech has suddenly committed a “fireable offense.”   So since society “allows” some people to achieve a level of success, any even implausible misstep by these achievers is met with harsh retribution.

An ever present factor in American life is White privilege.  Many tenets, explained beautifully by Dr. Robin DiAngelo’s work regarding White Fragility, help us to better understand this new and more hostile racial divide in America.  In fact, this divide has never ceased for many.  Instead, while people’s attitudes have been consistent, their behavior has changed.  One of the major tenets of white privilege is the notion that whites should have no discomfort associated with racial stress.  And “when racial discomfort arises, whites typically respond as if something is “wrong,” and blame the person or event that triggered the discomfort (usually a person of color).”  From Colin Kaepernick to Jemelle Hill, African Americans who dared to speak up have faced  severe consequences for speaking the truth.  And while the notion of white privilege is nothing new, the consequences have been dramatically increased.

An examination of moral licensing shows that people act most badly after having recently acted well.  After going to the gym for a week, you are much more likely to indulge in a piece of chocolate cake.  Americans elected Obama twice and acquiesced to the societal changes his administration supported.  The subsequent election of Donald Trump, with his huge gaffes in decorum and civility are not only acceptable to many, but rapturously exalted as a return to normalcy.  And Trump seizes the opportunity to normalize attacks on progressiveness and the continued evolution of American life by defending Neo Nazis, boasting about sexual misdeeds, and criminally stereotyping Mexicans.  As the new symbol of America, Trump epitomizes the shift from good to bad that is expected in moral licensing.  And if it’s good enough for our President, then not hiring a qualified African American in favor of a less qualified white is ok for the local business owner.  After all, we had 8 years of Obama.

The simple solution is to understand that you too are instinctively motivated to behave badly after doing good.  And self-regulation of your impulses is what makes you a great person. So since you have taken the time to read something informative, feel free to go surf the internet aimlessly for a hood street fight or bird nest video. But don’t discriminate against your fellow African American.

One thought on “This Sudden Surge in Racism Explained”