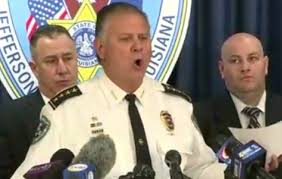 That a  white sheriff in the deep south feels empowered and emboldened to derisively and condescendingly speak to the African American community that dared question his actions and motives after he failed to arrest a white man who murdered an unarmed and innocent black man is the quintessence of white privilege in America.  Every bristle and hostile tone used by Sheriff Newell Normand speaks to his disrespect for the rights of all people, especially African Americans.  Normand’s childish and vulgar display is a national disgrace that is not only about contempt for those who dared speak out but a complete disregard of the actions of his department.

Locally and nationally, the tense relationship between the African American community and police departments is the result of years of harsh over policing and repugnant and regressive policing for fees.  Therefore the community, that has fathers, brothers, cousins and friends arrested and incarcerated at world class rates, often for nonviolent offenses, reacts when an obvious double standard exists.  Yet Normand stands and chastises the shocked citizens, as if oblivious to these facts.  “Normand is saying, I know who to arrest and when to arrest them, and y’all better not question me,” said Pat Bryant, co-moderator of Justice and Beyond.

NOT A NORMAL CASE

So when Normand slams the podium and claims this is not about race, he emotes ignorance.  Few are claiming that Gasser’s murder of Mr. McKnight was racially motivated.  However, when the white sheriff of the most arresting municipality in the world lets a white man go after he shoots a black man, then black people question whether Normand’s actions – not Gasser – were racially motivated.  Does the JPSO only arrest black people immediately?  The sheriff claims this case is not unusual and that there are 100’s cases where he did the exact same thing – not arrest a man that they know has committed a crime for strategic reasons in an investigation.  The sheriff offered no evidence and I called the sheriff’s office and spoke to the public information department.  As of press time, they have not provided one case to support this claim.  Is this another of Normand’s lies?

UNDER CHARGE COULD MEAN NO JAIL FOR SHOOTER

Normally the JPSO brings the harshest penalty based upon the evidence.  And a man that admitted shooting another who was unarmed and standing outside his car would normally get a second degree murder charge from Sheriff Normand.  According to Tulane University Law Professor Nandi Campbell, “His job is to arrest based upon the evidence.  But some people believed that the sheriff was attempting to investigate for the sole purpose to provide Gasser a defense.”  Manslaughter is usually the negotiated charge to which those charged with 2nd degree murder plead.  Instead, while the sentencing guidelines for a manslaughter conviction are 0-40 years, Campbell says, “If plea negotiation happens, the reduced charge would be negligent homicide, which is a paroleable offense.”  Citizens are rightly outraged that Gasser may get parole if he pleads guilty to killing Joe McKnight.

In the conservative Jefferson Parish of Louisiana, there is a history of outspoken politically incorrect sheriffs.  Harry Lee, Normand’s mentor, was infamous for calling it like he thought he saw it.  From erecting barricades to stopping blacks “in beat up old cars driving through white neighborhoods”, the “old Chinaman” – as Lee often referred to himself – shrugged and knew that his constituents wanted to feel safe and protected from the “dangerous black men from New Orleans” who would otherwise plunder and pillage the good whites of Jefferson Parish if not for the strong blue line offered by the JPSO.

But reading the emails supplied by unnamed elected officials, Normand seemed to relish in the vulgarity and racial offensiveness.  Even ole tell it like he thought it was Harry Lee would blush at the venom spewed by Normand.  And one only need read any comment board on any website and see similar or worse remarks by anonymous web trolls who are all type and no action.  Did Normand just want to use the N word in public?  His vulgarity and vitriolic laced recitation served no real purpose.  Maybe he can now check the thrill of using the N word in a press conference off his bucket list.  Only the deepest pockets of hatred and ignorance in Jefferson Parish can be happy with his unprofessional and bewildering choice to read verbatim the pits of the internet in a national press conference.   CNN and MSNBC had to apologize to their audiences.  Shame on you Sheriff Normand!

The key to whether or not Gasser spends time in jail will be the evidence.  Where was Mr. McKnight shot?  Was he stooping to look Gasser in the eye?  Was he just standing outside arguing?  The blood stains inside the car are another critical piece of evidence.  Blood splatters after the human body is pierced by a bullet at close range.  Is the blood just inside the door or on the seat near the passenger door?  Are large quantities of blood on the center console indicating Mr. McKnight was deep inside the car?  Was he trying to get inside the car?  Are Mr. McKnight’s fingerprints on the door or on the handle? Is the hand entry wound on the inside of his hand?  Was he holding up his hands once he saw Gasser’s gun?

Is this why a 3rd autopsy was needed? The only mention of the autopsy in the first press conference was to dispel the notion that Gasser stood over Mr. McKnight and shot him while he lay on the ground.  Did news that a 2nd independent autopsy was done by the Lafayette coroner make JP Coroner Gerry Cvitanovich nervous?  Cvitanovich says that he only needed to 10 minutes to retrieve tissue from the wounds and that it was not done to preserve the body in the event of a second autopsy.

Historically policing of African American men in the Deep South has been not only been frequent but harsh and brutal.  Recent high profile police shootings of unarmed black men have dominated the airwaves.  Yet all too frequently, black men complain daily of rough and abusive handling by departments locally and nationally.  Sheriff Normand acts like his highly arresting, trigger happy department is above reproach.  Instead of explaining his actions in a professional and calming manner, Normand was a defensive, thin skinned, agitated Donald Trump Impersonator.

The people of Jefferson and the citizens of the state of Louisiana deserve better.

3 thoughts on “Sheriff Normand is a National Disgrace”