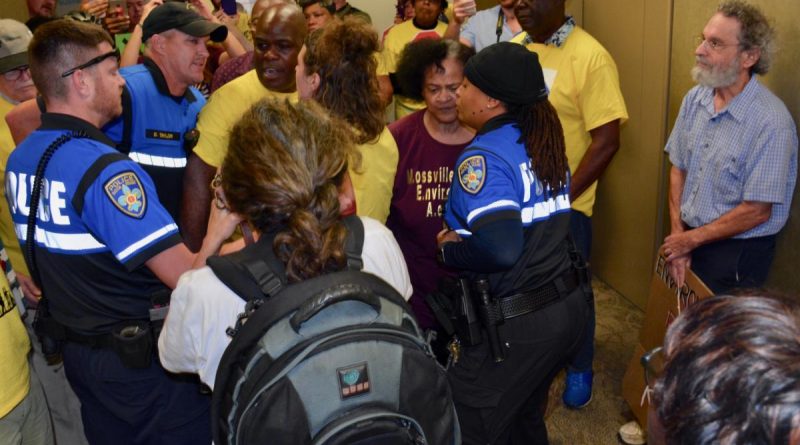 Arrest of the Innocent

Don’t expect this piece to be objective. These are my friends, for Heaven’s sake, who were so roughly and rudely treated for absolutely no reason. And yet many people’s stories corroborate the facts as I have laid them out.

It was the last day of a two-week march with various stops along Death Alley, the strip astride the Mississippi River from New Orleans to Baton Rouge. It used to be called Cancer Alley. But the forms of death meted out by the proliferation of chemical plants over the last 40 years is not restricted to cancer. Statistics reveal a slow and steady genocide of mostly poor Black communities whose ancestors acquired a little land and a house through staggering toil and hardship. They have nowhere else to go. And some have even been tricked into thinking that their life-threatening jobs are a blessing.

On a Wednesday, the day before All Hallow’s Eve – followed by the Day of the Dead — a peaceful group of about 50 protesters was on the 11th floor of a building, outside the offices of the Louisiana Association of Business and Industry (LABI). Politicians and regulators have often been far too cozy with industry in this River corridor. That unfortunate alliance is finally being noticed and called out by local, national, and even international media. Maybe that’s why the LABI offices were deserted on this particular Wednesday.

In any case, there was Pastor Gregory Manning, who is Black, on the floor on his stomach in handcuffs, with a white cop’s knee in his back. When the group had been rudely ordered to leave, Pastor Manning, always gracious, said they would be glad to leave as soon as an elderly lady, Ms. Christine, from one of the polluted parishes finished her brief statement. Something in the Pastor rose up to ensure that Ms. Christine, who had summoned the courage to confront great powers, would not be dismissed and silenced. That’s when chaos ensued.

The October 15-30 March Against Genocide was a Black-led march with both rural and urban organizers – young, old, Black, white, Latino, and Native Peoples. I plan to ask the elementary-age children – there were 6 on the march – what they thought of the situation when I see them at Justice and Beyond on Monday evening. Were they scared? What lessons did they take away? In other articles I’ve touted the wonderful qualities of Justice and Beyond children. I know they’ll have some wisdom.

Pastor Manning was probably trying to figure out where the assault was coming from and why. He’s never been arrested, and he is legally blind, though you wouldn’t know it by the way he navigates through the world. He is a visionary, a peacemaker, and a true man of God. The police never read him his rights. They handed him a paper which he told them he couldn’t read. I’m wondering about all those unmarked cars and hushed phone conversations that the protesters noticed. What were they about? It seems that Pastor Manning was targeted. Why?

William Barnwell was right down there on the floor with the Pastor, holding on to him in an effort to go through whatever Pastor had to endure. But a Black policewoman pulled him off. The next day, William’s only regret was that he hadn’t held on tighter and gone to jail where Pastor Manning was strip searched, put in an orange prison suit, and held until late that night. William, by the way, is an 81-year-old white Episcopal priest. Pat Bryant, Sylvia McKenzie, Gregory Guy, Janice Dickerson, and Ben Gordon kept vigil outside of the jail.

Their arraignment is Tuesday morning November the 5 at 8 a.m. in Baton Rouge City Court. Many of us are going along with attorney Bill Quigley to try to get the charges of resisting arrest, illegal entry, and inciting to riot dropped. Please join us. Inciting to riot is a felony charge. Pastor Manning says, “If that’s what I was doing, I guess I do that every Sunday.”

Ted Quant, former director of Loyola’s Twomey Center for Peace through Justice, was on the scene, took pictures, and said this: “The Baton Rouge police over-reacted and are trying to make an example of Rev. Manning, charging with a felony, inciting a riot. It is ridiculous!”

Pastor Manning’s church is Broadmoor Community Church at  2021 S. Dupre St. It has a banner outside that says “No Perfect People Allowed”. We were there this Sunday to show our support. Someone announced during the service that an explosion happened this morning at the Dow Chemical plant. No one was hurt. Maybe that was God’s punctuation on our work. 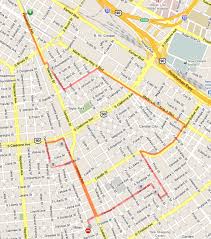